John McEuen & Friends - Will the Circle Be Unbroken 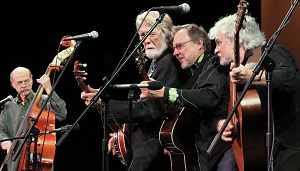 You won’t want to miss this special evening with John McEuen of the Nitty Gritty Dirt Band.  With his banjo, guitar, fiddle, and mandolin, John brings his unique cast of iconic Americana string wizards with him to share the music and memories of the Nitty Gritty Dirt Band’s incredible 50-year career and the landmark, "Will the Circle Be Unbroken" platinum album.  With narrative and music of early NGDB, John takes us on their incredible journey - interwoven with Nitty Gritty favorites, hot bluegrass, rarely heard NGDB early classics, Carter Family music, and pieces from his new album all in a multi-media presentation that features archival footage.  John was recently inducted in to the American Banjo Museum Hall of Fame. He has earned Emmy nominations, Grammy Awards, CMA acclaim, The Western Heritage Award, and the Will The Circle Be Unbroken album was inducted into the Library of Congress as "one of America's most important recordings."  A unique part of the show covers NGDB’s 1977 Russia trip, and what happened behind the Iron Curtain to the first American band to tour there. The cast, all stellar musicians in their own right, includes John McEuen | banjo, guitar, mandolin, fiddle, vocals; Les Thompson | bass, vocals, bouzouki/an original NGDB founding member; John Cable | guitar/vocals/ toured Russia as NGDB member; Matt Cartsonis |vocals/mandola/guitar/25-year music partner with John